ALROSA’s Supervisory Board has approved the group’s 2016 budget at a meeting held on December 22, the company said in a statement. 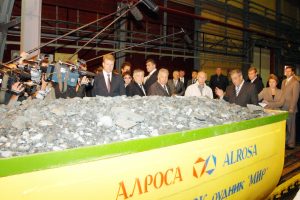 “The 2016 mining operations plan is drawn up in accordance with ALROSA’s Long-term Development Program,” reads the statement.

The Russian partially state-owned diamond mining company projected its rough diamond sales to reach up to US$3.5 billion in 2016, taking into account a minimal demand growth.

The budget also allocates funds for anti-crisis measures with the cumulative effect of RUB 12 billion due to optimisation of operating, investing and financial activities.

The Supervisory Board also approved a number of transactions and considered matters pertaining to the non-core assets divestment program, including ALROSA’s gas assets.

Equinox sells its Pilar Gold Mine in Brazil

Marius Kloppers to Retire as CEO of BHP Billiton, Andrew Mackenzie to Take on...