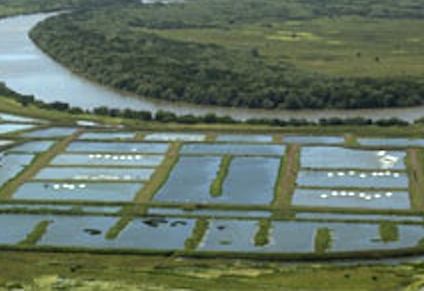 The Humpty Doo Barramundi Farm, which celebrates 20 years in business, has now completed the 2nd Stage of its major development program.

Stage 2 entails 10 new aquaculture production ponds, with the farm now capable of producing up to 1,500 tonnes of barramundi a year.

The Humpty Doo Barramundi Farm will now be the second largest producer in Australia.

Mr Westra van Holthe said this is an amazing accomplishment for a locally owned small business.

“I am incredibly honoured to open these ponds which others have worked so hard to create. This is a true blue Territory business that has backed itself and built something incredible,” Mr Westra van Holthe said.

“At a time when we as a nation are looking at ways to develop Northern Australia it is great to see businesses like this already flourishing,” he added.

Humpty Doo Barramundi is owned by five Northern Territory families and currently employs 22 locals, with an increase in staff expected over time.

$4.69m offered to 41 drilling and prospecting projects in WA