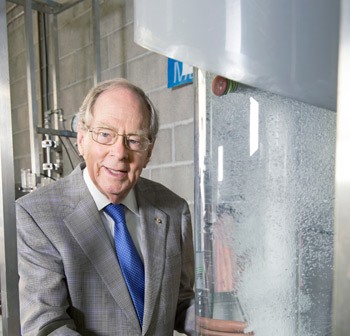 Graeme Jameson, a University of Newcastle chemical engineer, is this year’s winner of the Prime Minister’s Innovation Award.

The 2015 Prime Minister’s Prizes for Science winners were awarded by the Prime Minister and Minister for Industry, Innovation and Science the Hon Christopher Pyne MP at a dinner on Wednesday in the Great Hall of Parliament House.

Mr Jameson was recognised for helping the mining industry reap billions of dollars of extra value by using bubbles.

In the 1980s, he created the Jameson Cell which uses bubbles to capture super fine particles of copper, lead and zinc.

Based on floatation, a century old technology developed in Broken Hill, Mr Jameson’s technology involves a turbulent cloud of minute bubbles pushed through a slurry of ground-up ore where they pick up mineral particles and carry them to the surface.

The technology found many applications, most profitably in the Australian coal industry, where the Jameson Cell has retrieved fine export coal particles worth more than $36 billion.

Now, Mr Jameson is working on a newer version of his technology which allows for bubbles to capture even bigger particles — the size of a grain of sand.

Jameson Cells are also used to extract blue green algae from water bodies, and even to remove oil droplets from ice cream plants.

“It’s vitally important that science in Australia goes from strength to strength as we create the jobs of the future,” Mr Turnbull said.

“The recipients of these prizes are demonstrating the power of scientific discovery and the important role it plays in a modern, prosperous economy.”

Minister Pyne congratulated the winners on their prizes and noted the contribution they had made to science in this country.

“Science is central to our competitiveness, our creativity and our ability as a nation,” Mr Pyne said.

“As the calibre of these prize winners demonstrates, this is an exciting time for science in Australia. The work that is happening in labs, universities and institutions now will position us to succeed in the years, decades and generations to come.”

Kingston sells its 75% interest in Livingstone Gold Project to Metal...

Australian Agriculture – Feeding Australia and the world over