The Queensland Resources Council, the peak organisation for the State’s coal, metal and petroleum producers, explorers and suppliers, has welcomed the release of more than 6,700 square kilometres of land in the Surat and Bowen basins between Blackwater and Goondiwindi for gas exploration including domestic-only gas.

“This is a clear indication from the Government that the State’s resources industry is a key part of the post-COVID-19 economic recovery story and it demonstrates the Government’s commitment to allowing industry to responsibly develop gas for both the domestic and export markets,” Mr Macfarlane said.

“Today’s announcement follows the release of a three-year CSIRO study which found hydraulic fracturing in Queensland had little to no impacts on air quality, soils, groundwater and waterways.

“Queensland has led the way with its domestic-only approach to gas supply and 872 square kilometres of land will be reserved for the exploration of gas for the domestic market.

The release of land is part of the Government’s package of incentives to assist the exploration industry which includes rent and fee waivers. 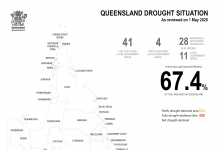 Mastermyne to acquire DMS for $20m

Tanami gold mine expansion creates new jobs in the NT